NEW Sparkle Like the Diamond You Are for KESS InHouse 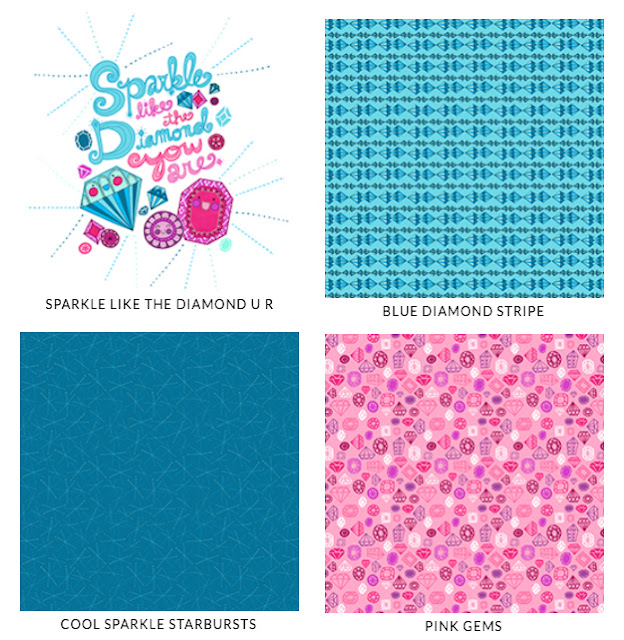 I'm proud to share my NEW Heart Safety Pin pattern that is now available on a wide variety of products that will let you show your support for your fellow men & women during these trying times. As an artist, I was looking for a way to create something positive for folks, to help them hold their heads up high and to send a signal to those around them that we are in this together. As a recent transplant to North Carolina, I've found that my own safety pin has spurred conversations that have made me feel more connected in a place where politics are very divisive. And, of course, I love that my fabulous client, Kess InHouse, jumped on board with this design! So superstar! XOXO
Shop here today! 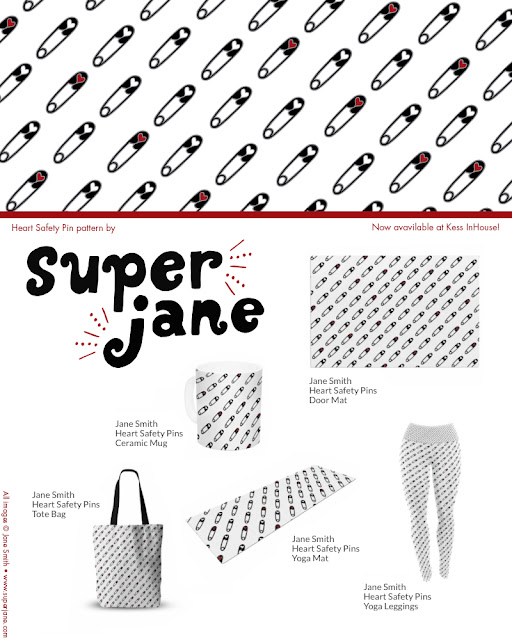 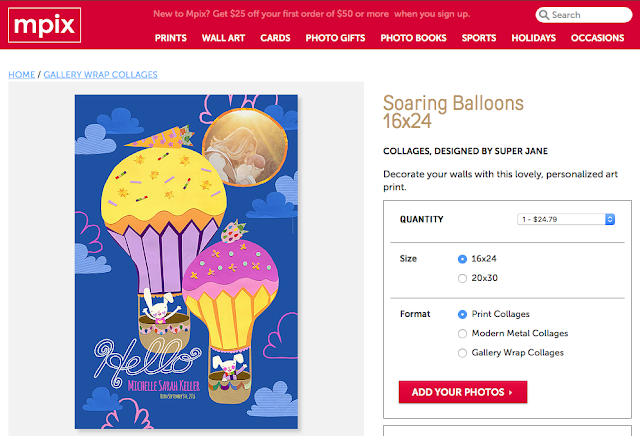 Welcome to my monthly interview feature! I’m so excited to be interviewing all the fabulous artists, illustrators and designers I’ve meet over the years (both personally and virtually!) and sharing their artwork and experiences here on Bird Meets Worm. Look for a new interview on the first Tuesday of every month. (Psst! You might have noticed that today is actually Thursday—sorry about that!! The New Year has been off to a bumpy start, but we are finally off and running over here at Bird Meets Worm! And BTW Happy New Year!!)

This month I’m so happy to be kicking off a whole new year of artist interviews with supa-dupa-star Illustrator, Mike Lowery! I’ve been a big fan for a longtime and the kiddo in my house has been a fan, too—Mike’s book Ribbit Rabbit and his activity calendar have been big hits! Mike Lowery is an artist living in Atlanta, Georgia with a beautiful German lady named Katrin and his incredibly genius daughter, Allister. Mike’s work has been seen on everything from greetings cards to children’s books to gallery walls all over the world, and he is a Professor of Illustration at the Savannah College of Art and Design Atlanta. He lives in an atomic ranch house, surrounded by trees where he likes to draw little animals in party hats and other silly stuff. You can view more of his artwork here!
Q: You’ve illustrated numerous hilarious and fun children’s books! (And I’m lucky enough to have a signed copy of Mike’s The Search For the Slimy Space Slugs! Squeee!) Give the scoop on your most favorite one—from idea & characters to sketches & finished art.

A: I have lots of favorites, but I’ll tell you about working on my newest series: “Doodle Adventures”.  When I was a kid, we didn’t have cool comics in the library.  We would sneak in stuff and pass them around at lunch and I always thought it would be really cool if there were comics that librarians would like too.  Well, that’s all completely changed and comics are now a big part of most school libraries.

I decided I wanted to make a series that combined my love for comics with my love for drawing/doodle books, and DOODLE ADVENTURES was born.  When it was time to come up with the narrator, I knew I couldn’t use just some ol’ boring human, so I drew a really plain looking duck.

The problem was, he didn’t have a TON of personality.   SO, I kept drawing and came up with this guy.  His name is Carl the Duck: 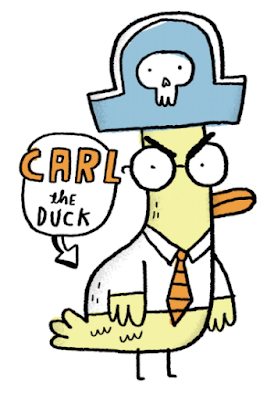 I liked that he looked grumpy and weird.  I immediately started hearing what his voice could sound like and got excited to draw him into the story.

From there I wrote out key moments that I wanted to happen in the story, and then took a really big stack of cheap paper to a coffee shop and started drawing.  At this stage the drawings were very rough, with a LOT of erasing and just figuring stuff out.  One of the days I was drawing at the coffee shop, I noticed a girl around 7 was drawing and she kept looking up at me.  I peeked over and realized she was drawing a portrait of me drawing!

Q: I’m a BIG fan of your awesome random facts illustration series! Dish with us about how the series began—inspiration & all!— and how it continues.

A: One morning I wasn’t on a trip, hadn’t had anything new to eat, hadn’t met any strange folks all day….and couldn’t NOT think of what to draw.  I sat staring at the blank page in my journal and for the first time in a really long time I absolutely did not know what to draw.  Then I remembered some weird fact that I had read…I don’t remember the very first one, but it might be something about how it’s illegal to carry ice cream in your pocket in Kentucky.

I’ve always loved those kind of weird nuggets of info, so I decided to draw it out.  And now I’ve been doing it for about two years.
Q: For more than a decade you have kept travel sketchbooks, marrying the classic artist sketchbook with memory and story; snapshots of time and place. Tell us a bit about how travel has influenced your habits as an artist and as well as your artwork itself.

A: THE ABSOLUTE MOST IMPORTANT THING AN ARTIST CAN DO:  Is to keep a sketchbook.  Whew.  There, I said it.

It’s a place where you figure out your “style” or what tools you like to use when you’re drawing and all kinds of stuff.  It’s also a great way of keeping track of your day, like a journal or (the most feared word by young dudes) DIARY.  I keep one every single day, and try to spend at least 30 minutes to an hour in it.

And drawing in your sketchbook doesn’t always have to be some intense scene, like sitting down next to a creek with your watercolors.  It can be really anything as long as your drawing.  For me, I really use it to remember things about my day a lot.

Since I was very little, I traveled a lot with my parents and my grandparents.  Traveling became a big part of my life and then later I married an amazing woman from Germany who had this really great family that we now go back and visit a few times a year…so travel isn’t just fun for me, it’s also necessary.

So, it just makes sense that some of my drawings started to be about the trips that I was on, new sights I was seeing, new foods, etc.  I love having these as a way to look back and remember trips, but I also get a lot of inspiration on these trips for new art and projects, and I’ll bring those ideas home and turn them into something that (hopefully) other people would want to look at.

Q: What is a typical workday like for you? Set the scene (workspace, materials, accessories) and describe your responsibilities (teaching, art making, business stuff) and creative juju (rituals, inspiration, process).

A: When we are in town (which for us is Atlanta), I mostly work out of the home studio that I share with my wife, Katrin, who is also a children’s book illustrator.  Some days we will work in our studio called Paper Ghost, which is also a little gallery we share with a few friends who are also illustrators.

We are out of town a lot, and in that case I’ll get up really early and go down to the lobby of our hotel and find a quiet spot where I can start drawing, usually with a cup of the free lobby coffee in hand.  I always try to draw before getting caught up on emails and other stuff.
Q: What do you know now that when you first began your design & illustration career you wish you’d known about: art licensing? business? self-promotion?

A: Honestly, I didn’t know anything when I first started.  I mean I knew BASIC stuff, like the difference between an apple and an onion, but when it came to business stuff, I knew very little.  I went to school for ART, which means that my instruction covered a lot of topics from watercolor to dark room photography, but very little was about the business side of making art and when it was, it was primarily about being an artist that exhibits in galleries.  Most of my formal instruction was about technique, and then later in Graduate School, it was about how to critique or explain your work.  Which meant that really early on, I actually learned what illustration is while I was already doing illustration.  I thought I was doing Graphic Design with a lot of drawings in it, and realized that what I was actually doing was ILLUSTRATION.

I read as much as I could on the topic, and I took every single job that resembled illustration, even if it wasn’t a good fit for me.  I sent my work to anyone who MIGHT hire someone to do a drawing for them:  magazines, ad agencies, local shops, publishers, clothing companies…anything I could find.  And then I just waited to hear back from ANYONE.  Slowly work started coming in, and I learned the business job by job.

I get a lot of folks (usually students) emailing asking for advice about the world of illustration.  This is really hard, because I’m not sure what to talk about.  Are they wondering what pens I use, or are they wondering what sort of portfolio case to buy when visiting art directors?  It would be like asking a mechanic:  How do you fix a car. 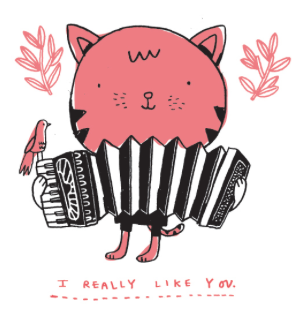 So, here’s what I’ll say:
1) Forget about what your “style” is and what it’s going to be.  Just draw a LOT.  Draw stuff you don’t feel comfortable drawing and don’t just keep drawing it the same way.  If you have a way that you like to draw EYES or people or whatever, stop doing it and try it a million different ways until you finally find the MOST perfect and comfortable way for you.  You won’t know it until you’ve tried what DOESN’T work.
2) Keep a sketchbook every single day.
3) Make work that people can use.  Meaning:  look at magazines, books, all kinds of stuff and see what they actually use.  Lots of folks want to draw floating characters with no backgrounds.  Not a lot of companies need that.
4) Send your work to these folks!

Q: Describe your most perfect day.

A: Get up.  Coffee.  Draw for a little.  Daughter wakes up.  Breakfast with wife and daughter.  Toast.  Boiled egg.  Butter. Get out of the house.  Sit and draw in sketchbook.  Read a little.  Maybe a graphic novel.  Ramen for dinner with friends.  Watch an 80s movie with the family.  Maybe Gremlins?  A few more hours of drawing.  Read a little more.  Bed.

Thank you so much, Mike, for chatting with us here at Bird Meets Worm! It was a hoot and a half!!
Email ThisBlogThis!Share to TwitterShare to FacebookShare to Pinterest
Newer Posts Older Posts Home
Subscribe to: Posts (Atom)