Welcome to the monthly children’s book review feature with a focus on diverse books here at Bird Meets Worm! My team of reviewers—Cara Chow, Denise Holmes, Joan Charles, Sharon Calle—and I are so excited to be championing books celebrating everything from gender diversity, people of color, the LGBTQ community to ethnic, cultural and religious minorities, people with disabilities and developmental challenges to controversial topics, unique family situations and anything and everything I did not include. It is to say we take a rightfully board view of diversity! We aim to shine a light on books that bring both familiar experiences to those who do not often see themselves represented in books and new experiences to those looking to expand their worldview. Here at Bird Meets Worm we believe in the power of story to build empathy and thus a better world for you and me and everyone. Look for a new review on the second Wednesday of every month. (PS You may have noticed that today is Thursday! Apologizes from Bird Meets Worm—Super Jane seems to be on a summertime one day delay this month!) 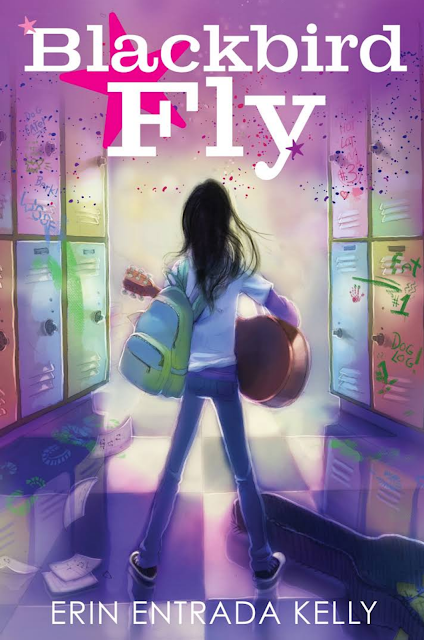 As the only Filipina in her school, Apple Yengko is used to being the outsider. Ever since a “fishy” incident with a schoolmate back in the 4th grade, she’s learned to cope with being different by putting her life in compartments - school, friends, and home are each packed neatly into their own separate boxes.

But now that she’s entered the 8th grade, her carefully constructed world is starting to come apart. Her best friends are acting weird. Her mother won’t let her study music, let alone buy a guitar. Worst of all, she’s just found out her name is on the notorious Dog Log, a not-so-secret list of the ugliest girls in school.

Luckily, Apple has her talisman—a Beatles tape that belonged to her late father. Even in the toughest times she’s able to turn to music for comfort and inspiration. The songs have become the soundtrack of Apple’s life and fuel her burning desire to be a rock musician.

Funny, wise, and sharply observant, Blackbird Fly follows Apple as she struggles with the pains and joys of growing up. Along the way she learns about true friendship, family, and finding her own special place in the world.

Welcome to my monthly interview feature! I’m so excited to be interviewing all the fabulous artists, illustrators and designers I’ve meet over the years (both personally and virtually!) and sharing their artwork and experiences here on Bird Meets Worm. Look for a new interview on the first Tuesday of every month. (BTW You have noticed today is Wednesday, not Tuesday! Apologizes for the delayed post—summer got the better of us here at Bird Meets Worm! XO)

A: Well thank you so much! That is super kind of you. I think I have been looking and admiring art and patterns for so long, it almost becomes second nature. So I may as well make that my tip number 1—take notice of patterns in life. Not just what you see on pinterest, but around the home, in nature, architecture, homewares, packaging etc. Make sure your design is nicely balanced - rework and rework it and rework some more! Then play with colours, it's good to research latest trend colours, but sometimes I like to work with specific colours. I also like to do a few variations of colours for one artwork.

Q: Your list of inspiration is pure happiness: Asian pop culture, Hello Kitty, toys, Russian dolls, Scandinavian folk art and happy magic (among others!)! Give us the scoop on what attracts YOU to these inspirations and how they’ve directly influenced your artwork.

A: I think we are attracted to those things that provide us joy and do make us happy. What I love about Hello kitty is that she is iconic and recognizable by her simplicity. I love Russian nesting dolls and folk art for their detailed florals and whimsical symmetrical designs. Happy magic that I refer to is bold, bright, magic icons, rainbows, unicorns and basically anything that is a bit woowoo! I try to sprinkle a little of these details into my designs—although it's not always commercial, my personal work will have that influence.

Q: Tell us all about your most favorite illustration or design project!

A: Hmm, tricky as I find it's always evolving, and I like different things about different projects. I think a favourite was years ago—going back about 11 years ago I did a job for McCann Erickson for Coke. It was in Dublin and I had to create a super spring style graphic for a billboard and they made cut-outs from my graphic. It was also used on bus shelters and they had the sounds of birds chirping in the bus shelters! So exciting to be a part of a project like that.

Q: One of your super star specialties is designing childrenswear graphics. Dish with us about this unique market: how you broke into it, what client relationships & terms typically look like and your favorite current trends.

A: I love designing for children. I think because I am a big kid, and I have forever admired classic children’s story book artists. I used to work as an inhouse textile designer at a women’s fashion brand, which was great learning for me. We worked on so many different ranges a year—doing embroideries, placement prints, applique and yardage—that it became second nature. When I had my kids, I couldn't work in the office, so I started freelancing and decided I really wanted to do more of my own style and try and develop that more. So doing childrenswear graphics came naturally.

Regarding client relationships, it's great to keep that relationship going with a client once you start a commission, because it can lead to repeat work. Which is fantastic!! I find terms are usually different with each client, so I tend to find out what they are after and go from there. If I feel a client is after repeat work, I would offer a good rate. You really have to feel out each situation because they are all unique.

Q: Self-promotion is one of the key areas of business that freelancers, like yourself, must excel in to be successful. What advice would you give fellow freelancers regarding 1) trade shows 2) social media 3) promotional mailings (print and/or email) 4) client outreach.

A: Trade shows are great, but expensive. I would say don't go jumping into trade shows without first having a solid body of work, have already worked for a few clients—so you know how to deal with them. Research as much as possible from previous participants. Be prepared to be let down by clients who say they love your work and want to buy it, and then never return your emails!

Social Media—get on it, show your work, don't be afraid to share it. Try and post daily.

Promo mailings/Client outreach—I only email. I don't send printed matter. A newsletter is a great way for you to stay in touch with clients, but also emailing them specifically with a sample of your latest artwork would probably work better. Tailor the email to suit the client (or potential client). Don't send a greeting card company only repeat patterns—they would probably like to see your illustration and lettering styles.

A: Wake up to hot coffee and avocado on toast on a sunny winters day. The house is quiet (which is the opposite to how it normally is—with 2 kids in the house!) I would spend the morning drawing, then painting in the afternoon, someone is taking care of food for kids and they are happy and content, while I can go about my crafty creative day uninterrupted. Ahh, bliss, one day this will happen!!

Thank you so much, Kat, for catching up with us here at Bird Meets Worm! You artwork makes us SO happy! Cheers!
Email ThisBlogThis!Share to TwitterShare to FacebookShare to Pinterest
Newer Posts Older Posts Home
Subscribe to: Posts (Atom)