Welcome to the monthly children’s book review feature with a focus on diverse books here at Bird Meets Worm! My team of reviewers—Joan Charles, Laurie Young, Sarah Orgill—and I are so excited to be championing books celebrating everything from gender diversity, people of color, the LGBTQ community to ethnic, cultural and religious minorities, people with disabilities and developmental challenges to controversial topics, unique family situations and anything and everything I did not include. It is to say we take a rightfully broad view of diversity! We aim to shine a light on books that bring both familiar experiences to those who do not often see themselves represented in books and new experiences to those looking to expand their worldview. Here at Bird Meets Worm we believe in the power of story to build empathy and thus a better world for you and me and everyone. Look for a new review on the second Wednesday of every month. 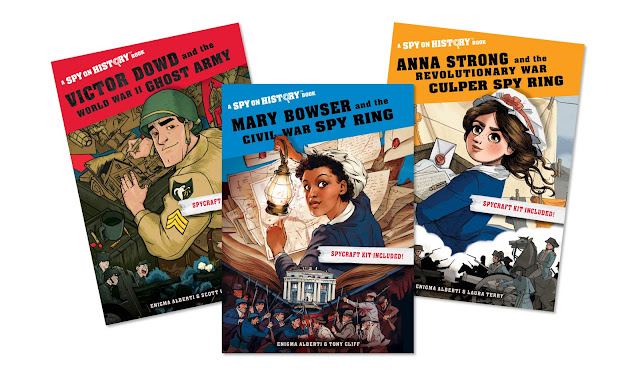 A SPY ON HISTORY BOOK SERIES:


A former slave rewrites documents from memory to pass to the North, while working undercover as a maid for the Confederate President in Virginia.

A wife and mother sends signals to the Patriots, enabling them to get messages safely to General Washington, right under the noses of the British redcoats.

An artist helps create elaborate and convincing illusions to fool the German army into thinking the Allied forces are larger and closer than they actually are.

If you’ve ever wondered whether one person can truly make a difference, these riveting, true-life stories will keep you turning the pages to find out how each brave hero risked their life to spy for the winning side in the Civil War, Revolutionary War and World War II.

Mary Bowser was taught to read and write by the owner who freed her. When she is asked to spy on President Davis while working as a maid in his home, she agrees in order to help the North win and put an end to slavery. Using her photographic memory, her quick thinking, and her ability to sew, Mary helped change the course of the Civil War, assuring the North’s victory.

Anna Strong hated the presence of British soldiers occupying her small Long Island town. When her husband is taken prisoner under false charges, she welcomes the opportunity to spy for the Patriots by signaling them when a message is ready to be smuggled to George Washington’s army. Anna’s cleverness helped turn the tide and gave Washington the advantage he needed to push back the British and win the Revolutionary War.

Victor Dowd was recruited to be part of an elite crew of artists, sound effect engineers and actors to form the “Ghost Army,” a top-secret project designed to create a highly detailed illusion that fooled the German army. Through careful artistic renderings of each actual unit’s specific characteristics, they utilized graphics, sound effects, wire signals, and inflatable tanks and artillery in order to spy on the Germans and trick them into believing that the Allied forces were a more immediate threat than they actually were. Victor’s artwork helped give cover to the Allies so they could advance and win World War II.

Additionally, these interactive stories come with clues and tools to help amateur sleuths solve the mystery of how they did it. Included in each book is a cipher wheel to decode encrypted messages, red acetate to reveal hidden clues in the text, a map to follow the action and a vellum sheet with cutouts exposing just the right words to complete a secret message. There’s also an answer key to check your work, a historical note from the author and a bibliography to encourage further reading.

This series is not just for kids interested in history, but anyone who loves a good mystery and wants to try their hand at being a spy!


Reviewed by: Laurie L Young
Email ThisBlogThis!Share to TwitterShare to FacebookShare to Pinterest

Welcome to my monthly interview feature! I’m so excited to be interviewing all the fabulous artists, illustrators and designers I’ve meet over the years (both personally and virtually!) and sharing their artwork and experiences here on Bird Meets Worm. Look for a new interview on the first Tuesday of every month.

This month I’m pleased as pink lemonade punch to be chatting it up with the lovely Illustrator Kailey Whitman! Kailey is a fellow fabulous Tugeau2 artist (I love her artwork!!), and I recently had the pleasure of meeting her in person when our agency took a group trip to NYC to visit publishers!! Squee! Kailey is a freelance illustrator working here and there, in and around Philadelphia. She loves to make pictures for magazines, newspapers, books posters, and just about everything under the sun. Her clients have included The New York Times, The Atlantic, Simon & Schuster, and Random House. When she’s not drawing, she’s usually outside, finding new places to explore. You can see more of her artwork here!

Q: I absolutely love your vivid, dreamscape-like style and your evocative palettes! Give us the scoop on your creative process—from initial ideas to sketches to final artworks.

A: Thanks so much, Jane! I always start with some scribbling in my sketchbook. I take a lot of notes during my brainstorming and it helps me get really clear on what the illustration is going to be about. A lot of times, illustrators are asked to draw kind of abstract concepts, so I like to think about how I can attach those concepts to a scene or an object. Once I feel like I have an idea, I make a million thumbnails, and then take one of them right into Photoshop where I start drawing! After I have an initial sketch and maybe a value structure, I dive into final detail drawings, and then finally add some color!

Q: You create gorgeous illustrations for a wide variety of editorial clients, including numerous magazines and newspapers. What unique considerations are involved in creating editorial images and how is that different from other types of illustration?

A: The biggest difference is the deadline! Editorial work can be pretty quick, and for better or worse, it makes you think a little faster. I’ve had assignments that are due the same day, so it’s a pleasant surprise when I have a longer deadline and can really explore all of my options. For my editorial work, the solution that we land on isn’t always exactly what I want, but for the time constraints, it solves the problem.

Q: Dish with us a bit about who, what, where inspires you.
A: Ooh—lots of things inspire me! I love to travel and I’m big on getting out and doing other things when I’m feeling stuck, so if I can, I’ll go out for a walk or I’ll go somewhere new. Or if I’m feeling really stuck, especially for color, I’ll look through my old art history books and steal a few palettes or maybe a composition. But I’m art nouveau obsessed and I always find inspiration in Mucha.

A: I’ve loved all of my projects! I’ve learned something new from each of them.

I really liked working on my home game poster for the Philadelphia Eagles, because they gave me a lot of creative freedom and I got to learn a lot about football. I also got to do some hand lettering! It was a very interactive project, because I got to go to the game, sign the posters and meet the people taking them home. It was a really cool experience!

Right now I’m working on another children’s book that’s all about space and I’m sooo into it. I love looking at the stars and learning as much as I can about them, so it’s really exciting to me. Also, looking for reference is just the best. Any project where I get to learn something new is my favorite.

Q: What advice would you give fellow illustrators about: 1) self-promotion, 2) best business practices and 3) daily work habits?

A: This is a big question! So much of this has been trial and error for me. Self promotion is especially hard for me. Posting on social media is my least favorite thing, but I do a lot of emails and post cards to different publications and it works for me.

As far as business practices, I know I really need to stick to regular hours and set boundaries for myself, otherwise I would work all the time. It’s hard as an artist to separate yourself sometimes. Work life balance is a real thing! And finding my daily work habits has been more trial and error! I’m a morning person, so I love getting up at like 6am and drawing and having coffee. And then more coffee. I’ve learned that I’m just about useless at 2pm, so I save easier work for the afternoon. Sometimes, I’ll work until 5pm or 6pm, but sometimes, if I feel like if I’ve accomplished enough, I’ll stop working early and go for a run or take care of errands or do something for myself. It’s all been a balance of creating structure, while also enjoying the fact that I create my own schedule!

A: I do love Sundays! It’s the most low pressure day of the week. My perfect Sunday starts with coffee! Maybe also with pancakes or waffles and then I would definitely include being outside. I love going on day hikes and taking pictures to use as reference later. Or just walking around somewhere and people watching. My boyfriend and I like to cook on Sundays, too, so we would be trying a new recipe in this scenario! And we’d probably end it with some sort of documentary or show. We’ve been bouncing between Jeopardy, Schitt’s Creek, Portlandia, and the Aaron Hernandez documentary, so any one of those!

Thanks so much, Kailey, for chatting it up with us here at Bird Meets Worm!! We think you're awesome!
Email ThisBlogThis!Share to TwitterShare to FacebookShare to Pinterest
Newer Posts Older Posts Home
Subscribe to: Posts (Atom)