I'm pleased as rum punch (on a jet plane to a fabulous Hawaiian getaway) to share my 3 NEW metal luggage tag designs for Mpix! And bonus—they are fully customizable with photos and personal information. How chic would you and your kiddos be with these on your suitcases?!

Super Star Children's Book Review: The Hate U Give

Welcome to the monthly children’s book review feature with a focus on diverse books here at Bird Meets Worm! My team of reviewers—Cara Chow, Denise Holmes, Joan Charles, Sharon Calle—and I are so excited to be championing books celebrating everything from gender diversity, people of color, the LGBTQ community to ethnic, cultural and religious minorities, people with disabilities and developmental challenges to controversial topics, unique family situations and anything and everything I did not include. It is to say we take a rightfully board view of diversity! We aim to shine a light on books that bring both familiar experiences to those who do not often see themselves represented in books and new experiences to those looking to expand their worldview. Here at Bird Meets Worm we believe in the power of story to build empathy and thus a better world for you and me and everyone. Look for a new review on the second Wednesday of every month. 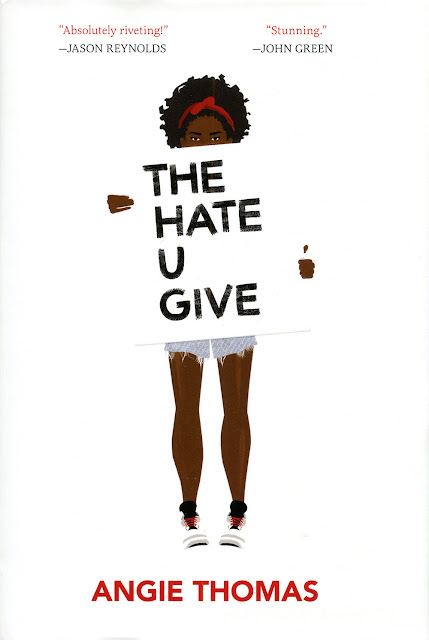 Angie Thomas awakens her audience to see thru the eyes and feel thru the heart of 16-year old Starr Carter as she witnesses the murder of her friend, Kahlil, an unarmed, African American teenage, at the hands of a white police officer.

In the aftermath of the shooting, Starr struggles to make sense of the disparities in her own identity both as a citizen of a poor, crime-riddled, African American neighborhood and as a student of a wealthy, predominately white, private school. Starr’s journey from sadness to anger and fear to bravery is anything, but black and white. Her story serves as a powerful touchstone for cultivating compassion and sparking conversations about racism, the militarization of the police and the lingering effects of slavery in America today. Just as Starr is a light in the darkness for her family, friends and community, so can she be for the audience as well. Her story makes a powerful argument in favor of questioning the status quo and using one’s voice to create positive change.

In the tradition of The Outsiders and The Catcher in the Rye, The Hate U Give is, without a doubt, destined to become a modern classic. It is so timely, so of the moment, that it is a must read now and for generations to come.

Reviewed by: Jane Smith
Email ThisBlogThis!Share to TwitterShare to FacebookShare to Pinterest

Rave reviews are in for my NEW picture book, "It's Halloween, Chloe Zoe!" I'm SO excited to share that Publisher's Weekly says:
"In this sixth book in Smith’s holiday-themed Chloe Zoe series, the returning heroine, a yellow elephant, is excited about Halloween but uncertain about trick-or-treating at the “old, creepy house on the corner"...Smith’s collages are far more festive than frightening...Chloe Zoe’s candid and enthusiastic narration makes this a good choice for Halloween newbies."
Read the full review here!
Available for purchase August 2017 here!